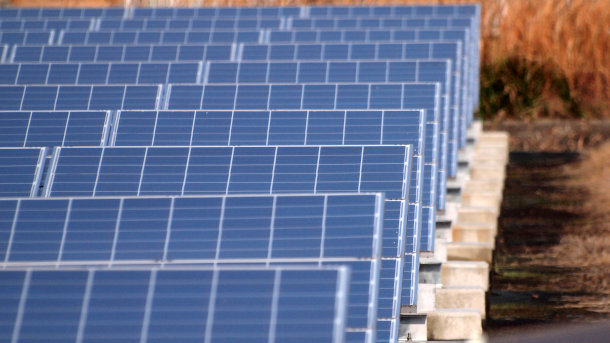 After years of ever-changing policies surrounding clean energy, the solar industry now sees 10 years of consistent policy ahead to build stable businesses and industry around. (Photo: coniferconifer, Flickr, CC BY 2.0)

For years renewable energy has had on again, off again financial support from the US government, limiting its development to fight the growing climate crisis. Those days appear to be over now that the 2022 Inflation Reduction Act provides a decade of tax breaks and funds for clean energy. George Hershman, CEO of SOLV Energy, joins Host Steve Curwood to discuss this new day for solar power.

For years, solar and wind power have had off-again-on-again financial support from the US government, limiting renewable energy development to fight the growing climate crisis. Those days are now over. The 2022 Inflation Reduction Act ends federal financial stuttering for renewable energy with a ten-year commitment for tax breaks and funds to boost innovation and industrial development. George Hershman is the CEO of SOLV Energy, a company with 4,000 employees that installs utility scale solar arrays. And now with the money and tax credits of the Inflation Reduction Act coming online, his company, and just about the whole renewable energy sector, are looking toward explosive growth. George Hershman, welcome back to Living on Earth.

HERSHMAN: Thank you for having me back, Steve. This is a pretty exciting time.

CURWOOD: Our pleasure. Now, we talked to you earlier this year about the interruption of solar panel importation from Asia that President Biden has now lifted those restrictions for the next two years. So today, we want to ask you about how the big Inflation Reduction Act affects the outlook for your sector and your business. First, what does this mean for your line of business?

HERSHMAN: Well, this is really historic legislation for the solar industry. And so when I look at the industry as a whole, I think every sector has been addressed. There's really three kind of market sectors that we look at from a solar standpoint. We've got a residential market, a commercial market and the utility scale sector, which is where our company operates the most. But all three of those sectors have received, you know, a lot of support through this bill. That is exciting for me is the fact that we have 10 years plus of consistent policy that we can build businesses and industry around and, and really make the historic change that we need in this country to address climate change through clean energy.

CURWOOD: Talk to me about the scale of the manufacturing stimulus. Is what's been laid out in this legislation going to be sufficient for the demand you expect to see in the years ahead? 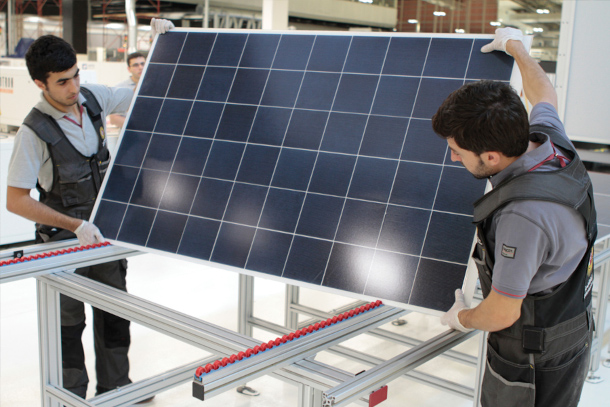 HERSHMAN: Well, the way that it's structured is a performance tax credit. So the more you build, the more tax credit that manufacturers get. So, it's really built for scale. It's intended to build large scale plants to meet the demand. That will take time. We will likely not have that manufacturing online, to meet all of those goals. So it's still going to be an industry that relies on, you know, a portion of imports for its installation. But this bill does a lot to start to build factories. We're already hearing multiple manufacturers make announcements of either new plants or expansion. Now we have this support and legislation that's in line with what we all ultimately want, which is a stable supply chain that we can rely on and build here domestically.

CURWOOD: So George, what's your best guess as to the total amount of renewable energy we need to get online every year to hit the targets that have been set? And how does that compare to say what a coal fired power plant can turn out?

HERSHMAN: So you know, by all estimates, we need to, by the end of the decade, start to put in 70 to 80 gigawatts of renewables in the ground every year to replace the decommissioning, coal and gas fleet, as well as to supply new load for the demand that will be added due to the electric car fleet. So in comparison, a traditional coal plant is somewhere between two to three gigawatts. So you can imagine we're going to replace, you know, 50 of them annually.

CURWOOD: Now, what about jobs in this renewable energy sector now? What do you see in this next five to 10 years in terms of more jobs?

HERSHMAN: This is a massive job creation bill. We've seen as high as 2 million new jobs. I've seen numbers with manufacturing and wind that say, you know, eight to 10 million jobs. So this is a clean energy bill on top line, but it's really a job creation bill on the bottom line.

CURWOOD: Now, let's talk about your own business. What's changed now that you're not looking at the inability to import solar cells, when in fact, there's this huge stimulus from the federal government? What's changed for you, and what projects are you now taking on? 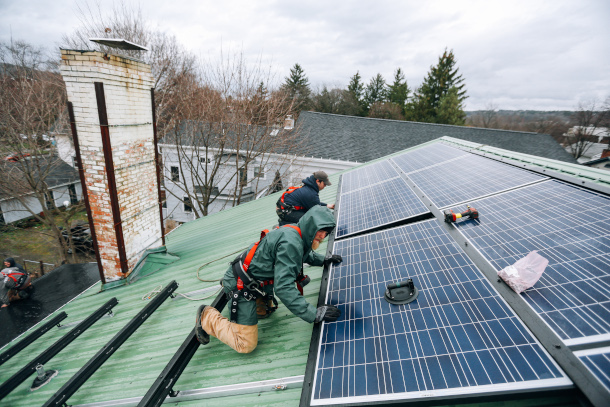 The solar industry sees the creation of millions of jobs as the federal government supports the industry through the newly passed legislature. (Photo by: Renovus Solar, Flickr, CC BY 2.0)

HERSHMAN: The forward-looking forecasts in the business are to grow it three or four times the size it is today, just to stay at pace with our customer demands. We're also looking at, you know, how do we provide all of the service offerings that our customers need as this market grows so large. This has traditionally been a business that has a three to five-year runway. We usually look at it in very short blocks because we get an investment tax credit for five years and it starts to tail off. So then there's a ramp-up-ramp-down cyclical nature of this business over the last 12 years. Well, now you can look into the future and you know exactly what the business model is going to look like. And it is just, you know, it is straight up.

CURWOOD: George, what in the way of new technology would you like to see over these next years?

HERSHMAN: The IRA legislation addressed investment tax credits for hydrogen and as well as emerging technologies. I think one of the ways that the bill was structured uniquely is that after five years, the investment tax credit, which currently is set for wind and solar, in five years, it transitions into a techneutral ITC, which basically says any technology that decarbonizes energy production can receive an investment tax credit. So that leaves it open for new technologies and new inventions as we move forward so that we don't stay stagnant in a clean energy development. I like the fact that we're incentivizing inventors to think outside the box and think of what is the next technology, let's don't pick winners and losers. And let's let the market figure out what we're going to do five years from now.

CURWOOD: Right now, as we're talking, George, the financial markets are kind of unhappy, and people are talking about recession. What is your gut tell you about what this legislation in the whole build out of a new generation of a way to generate electricity will address what appears right now to be economic woes in this country?

HERSHMAN: Well, I think that it addresses a lot of the needs we will have going forward. It's hard to say that tomorrow, we're going to point to something that this bill did that change some of the challenges we have today in a supply chain that is coming out of COVID. There's just a global kind of restructuring. But some of the things that we face, just structurally, like, you know, manufacturing that's moved overseas, that's hurt our supply chain, this brings a lot of that manufacturing back. If we produce low cost energy in this country, we will manufacture more because manufacturing traditionally moves to low-cost energy markets as much as it's moved to low-cost labor markets. And so because we are efficient from a manufacturing standpoint, and we can do it with low-cost energy, we're going to build a manufacturing infrastructure. Again, we're already seeing that we supported it in the CHIPS bill, you're going to see CHIPS coming back here. Now you're going to see solar supply chain coming here. We're just going to see an onslaught of manufacturing and business creation that will ultimately make us stronger in the long run.

CURWOOD: George, I got to ask how you feel now in the wake of this Inflation Reduction Act being passed is the appropriate scientific term? Wahoo!

HERSHMAN: Yeah, I think so that I'll go with that one. I'm excited. The industry's excited. While we're very excited, and we got together last week as an industry at RE+, which is the biggest conference in the country around energy and renewable energy, I think the message was was interesting. It was, “Let's celebrate. Let's take a victory lap. Let's pat each other in the back, and then let's put our head down and get to work because we have a lot of work to do.”

CURWOOD: George Hershman is the CEO of SOLV energy. Thank you so much, George, for taking the time with us today.

HERSHMAN: Absolutely. Thanks, Steve. I appreciate the time.

More on the numbers of what the Inflation Reduction Act includes