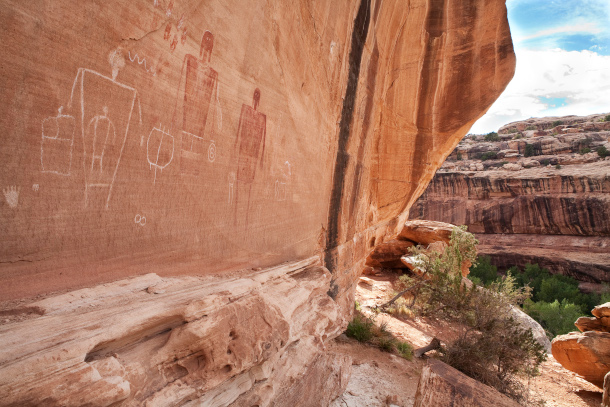 Grand Gulch cliff art in Bears Ears. When the Bears Ears National Monument lost much of its protected status, Indigenous historical art like this was at risk of vandalism and degradation. (Photo: Courtesy of US Bureau of Land Management on Wikimedia Commons)

President Biden has restored the Northeast Canyons and Sea Mounts, Grand Staircase-Escalante, and Bears Ears National Monuments, reversing orders of former President Trump. The lapse in protection for the Bears Ears area had especially led to an increase in vandalism and looting. Executive Director of the Bears Ears Inter-Tribal Coalition Patrick Gonzales-Rogers explains to Host Bobby Bascomb how lands are more than just historical sites for native peoples, and how they are key to their cultures, their spirituality, and their being.

BASCOMB: Activists cheered an October 7th announcement from the White House that President Biden would restore protection for three national monuments, each of which were shrunk or modified under the previous administration.

Many Republicans say Congress should make these decisions not just the President, so boundaries can be permanently settled.
The three in question are the Northeast Canyons and Seamount Marine National Monument, off the coast of New England and Mid Atlantic as well as Grand Staircase-Escalante and Bears Ears National Monument, both in Utah.
President Biden pledged to restore protections for the monuments on the campaign trail, a move welcomed by environmental groups and native nations though they were frustrated that it took the better part of a year to do so.
Native American nations were especially vocal about Bears Ears. 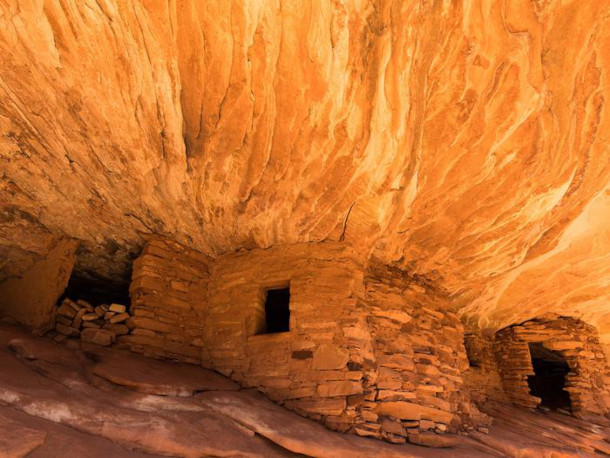 “House on Fire”, a Cedar Mesa cliff dwelling in Bears Ears National Monument where indigenous tribes once lived. (Photo: Courtesy of US Bureau of Land Management)

Native peoples have lived in the area known as Bears Ears for upwards of 13,000 years.
It’s considered sacred land by many Native Americans and home to thousands of archeological sites and ancient petroglyphs.
So, 5 nations of native peoples, each with deep ties to the land, petitioned President Obama to use the Antiquities Act to create Bears Ears National Monument in 2016.
Just a year later, President Trump shrank the size of the National Monument designation by roughly 85 percent, claiming it would boost economic development. 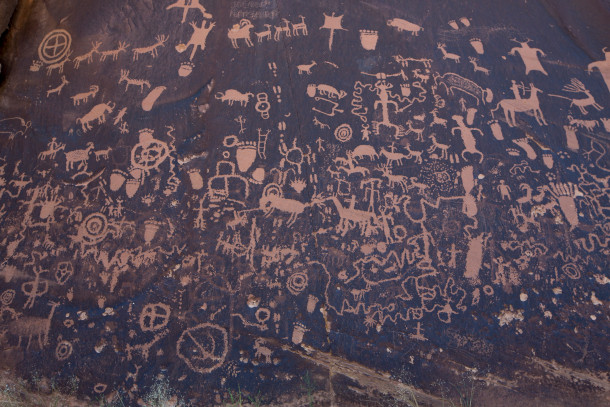 A wall filled with indigenous rock art is just some of the remarkable features of Bears Ears National Monument that need protecting. (Photo: Courtesy of US Bureau of Land Management on Flickr)

And in the absence of any protection many ancient archeological treasures there, including native burial sites and petroglyphs, have been damaged.
Patrick Gonzales-Rogers is the Executive Director of The Bears Ears Inter-Tribal Coalition, representing the 5 nations native to the region.

GONZALES-ROGERS: For some of the tribes, and there are five distinct ones, the Bears Ears in many instances, represents their particular church and cathedral. These are where cultural and spiritual practices are not just part of their history, this is a part of their contemporary state of being. I would really encourage people to think about it in the same way that you would think about a 300 year old Protestant chapel in rural Connecticut, or the Vatican, or the Cathedral of Notre Dames. These are iconic, these are inflection points, and they're the cornerstone of their actual theology. 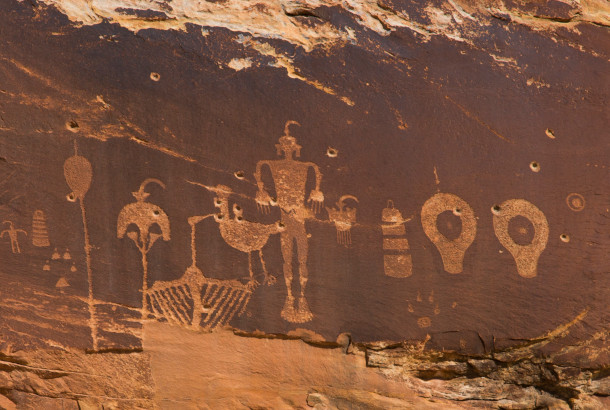 Close up of indigenous rock art in Bears Ears. (Photo: Courtesy of US Bureau of Land Management on Flickr)

BASCOMB: I understand that Bears Ears is actually being damaged right now by visitors to the area.

GONZALES-ROGERS: Mainly the BLM and the US Forest Service have not added more resources, either in a people power sense, or assets. And so there is very little to manage this flow of people. We've already seen all kinds of graffiti, as well as destruction of cultural sites. Whether these are petroglyphs, potteries, or things of that nature, these become, you know, in some ways, the objective of visitors. Can I find these things? Can I take something home? Some are done with a kind of, what I would call, benevolent ignorance. Others are they want to actually destroy native things. And so this makes for, in some instances, irreparable harm. 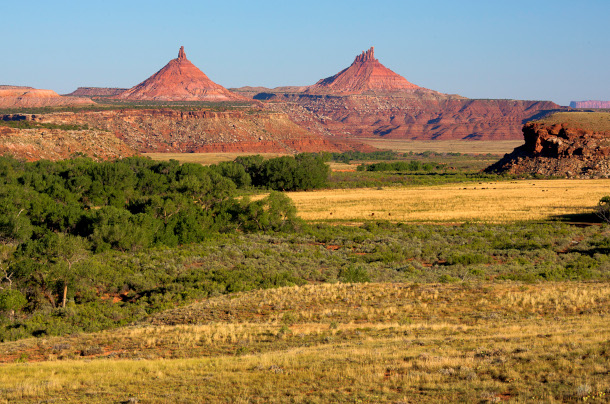 Indian Creek in Bears Ears. (Photo: Courtesy of US Bureau of Land Management on Wikimedia Commons)

BASCOMB: So just looking at a little bit of the history here, Bears Ears was established as a national monument under President Obama and then shrunk by roughly 85% under President Trump. Essentially, to pave the way for uranium mining there. To what degree is that kind of extraction still a possibility in Bears Ears?

GONZALES-ROGERS: So there is a backstory to this. And this backstory is a horrific one. Trump did this under the rhetoric of the proper usage of public lands for this regional area is to turn over to the extraction industry. And that would then buoy the regional economy. Well, a couple of things about that. And so again, let's be specific, it's uranium. You can't use the land for another 10,000 years after you use it for uranium. Two, as we speak, we have about a four decade surplus of uranium. All right. Third, uranium can be actually acquired 85 to 90%, cheaper in Canada, Australia, and the Ukraine. So that's the third point. The fourth point in which is the most egregious, the entity that most benefits from this is an entity called Energy Fuels, Inc. They are not a US company. They're a Canadian company, with outfits in Colorado. And they basically drew down the reduction boundaries, which the Trump administration followed almost verbatim. 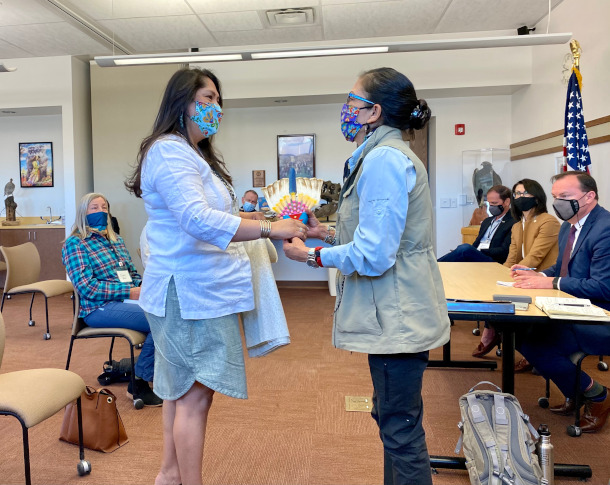 US Secretary of Interior Deb Haaland speaking with stakeholders of Bears Ears in Utah. (Photo: Courtesy of US Bureau of Land Management on Flickr)

BASCOMB: Patrick Gonzales-Rogers is the Executive Director of the Bears Ears Inter-Tribal Coalition. Patrick, thank you so much for taking this time with me today.