Getting The US Grid To 40% Solar 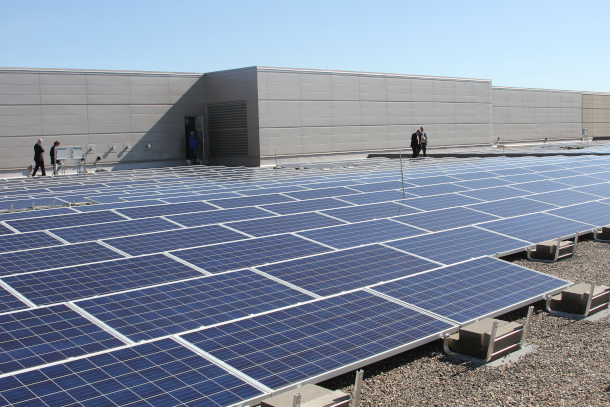 The Biden Administration's goals include decarbonizing the energy sector by 2035 and a recent report by the Department of Energy provides a blueprint for how solar power can produce up to 40% of the nation's electricity by then. To reach that goal, the United States will need to quadruple its annual solar installation, a project that will require significant investments and a transformation of the grid. DOE’s Becca Jones-Albertus joined Living on Earth's Bobby Bascomb to discuss this overhaul and how it can be equitable.

Well for the United States to keep up its end of the bargain in international climate talks we will need to curtail emissions dramatically in the next decade. And shortly after taking office President Biden announced targets to do just that. He outlined a goal to create a carbon pollution free power sector for the United States by 2035 and a net-zero emissions economy by 2050. A recent report from the Department of Energy finds solar could be a huge part of the carbon-free energy mix, with the potential to cut consumer energy costs, power roughly 40% of the US by 2035 and create up to 1.5 million jobs. But time will tell if the Biden Administration will get the funding from congress in time to legitimately put this plan on the table at the climate summit. For details we turn now to Becca Jones-Albertus, Director of the Solar Energy Technologies Office at the US Department of Energy. She spoke with Living on Earth’s Bobby Bascomb.

JONES-ALBERTUS: Thank you so much, Bobby. Great to be here.

BASCOMB: So where would the solar energy come from for this project? Are we talking about rooftops, community projects, massive arrays, or maybe all of the above?

JONES-ALBERTUS: Definitely all of the above. So today and just for context, we have about 80 gigawatts of solar on the grid, about 3% of US electricity, we're looking to as we decarbonize the grid is getting to like 1000 gigawatts and more than 10 times as much, you know, to provide about 40% of us electricity. So, to get there, we're talking about dramatic expansion in the amount of rooftop solar, as well as solar on commercial buildings and a large growth in the number of large-scale solar projects as well.

BASCOMB: What is the current price on average for a unit of energy from solar versus fossil fuels? And how does that compare to a decade or two ago?

JONES-ALBERTUS: So today, in many parts of the country, solar is actually the cheapest source of new electricity generation. The cost of solar depends where exactly you are in sunnier regions of the country; cost can be even lower. And with tax credits, we're seeing prices that are below three cents a kilowatt hour for bulk wholesale electricity. On average, across the country, we look at the cost of solar electricity, without subsidies, that's kind of our benchmark. And the average, or typical cost across the country we see now is about four and a half cents a kilowatt hour. So this is an 80% reduction in cost since from where we were just a decade ago. So tremendous reduction in costs, and it's making solar again, in many parts of the country cheapest way to add new capacity. And in some parts of the country, it's now cheaper than operating existing capacity during times when the sun's out. 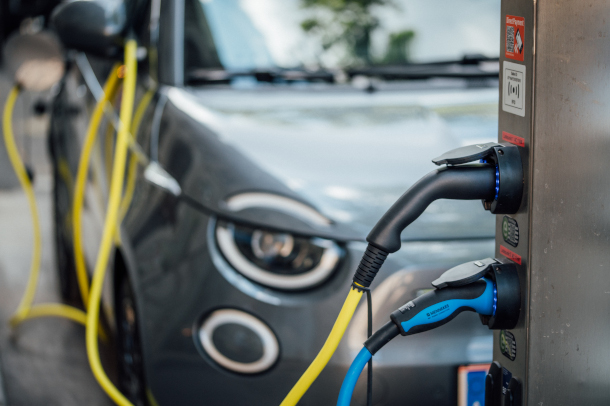 Charging stations for electric vehicles are part of the $3.5 trillion budget bill currently being discussed in Congress. (Photo: Ivan Radic, Flickr, CC BY 2.0)

BASCOMB: Well, that makes sense. I mean, it stands to reason that solar energy would be cheaper in a place like Arizona as compared to say Alaska.

JONES-ALBERTUS: Yes, the solar resource in the US is strongest in the in the southwest of the country. And so solar is, you're going to see the lowest prices for electricity in places like Arizona, but actually solar can be affordable across the country. And the amount of sunlight doesn't vary by more than you know, about a factor of two across the country. So we're really seeing solar growth across the entire country. And all of our working targets are aiming for solar to be an energy source for all of the United States.

BASCOMB: Now, what about the potential for solar in the transportation sector? You know, several car manufacturers, including Ford and GM, are fast tracking their plans for electric vehicles, pledging to introduce in some cases, an entire fleet of new electric vehicles in just the next few years? How might solar energy fit into that mix?

Hurricane Ida did more damage to Louisiana's electrical grid than any other storm in the history of the state, a local power company said.https://t.co/HOx7CyraQd

JONES-ALBERTUS: Yeah, so you know, the trends with electric vehicle adoption are a really important part of decarbonizing our energy system as a whole. And there's a really nice opportunities for synergy with solar and with electric vehicles in particular, you know, there are solar energy stations that are being set up to help with EV charging, and better integration of solar and EVs can enable EVs to be charged when there's surplus solar on the grid. And therefore, they can take advantage of a really cheap source of power, you know, when there is flexibility and when that charging occurs. And EVs are also being looked at as how they could be a grid resource and when coupled with solar to be able to provide better resilience to the grid if needed, and provide greater services to support the reliability and the resilience of the grid, over time. We're not there yet, but there's a lot of exciting work looking at how we can use solar and EVs together to better support the grid.

BASCOMB: Well, what kind of large-scale infrastructure changes would be needed to transition from an energy grid that's largely driven by fossil fuels as we have today, to one that's largely powered by the sun?

JONES-ALBERTUS: Transitioning to an electric grid that's powered by solar along with wind and increasing amounts of energy storage will involve operating the grid in a different way. Today, our grid is built around generators that rotate and provide inertia to the grid and that's a form of how we get reliability to the grid. Solar and wind and batteries connect to the grid through power electronics. And so the way that they interface and the way that they provide reliability services to the grid is fundamentally different, and will require new learning and new experience in how we operate a grid in that way. But we know that we can operate a grid like that and maintain its reliability. We do expect as we build out solar and wind to see significant expansion of the transmission system and significant additions of energy storage to the grid, because both solar like wind are variable the sun's not always shining and wind’s not blowing and so both energy storage and transmission can help ensure that we have enough power supply or energy supply for when that energy is needed. 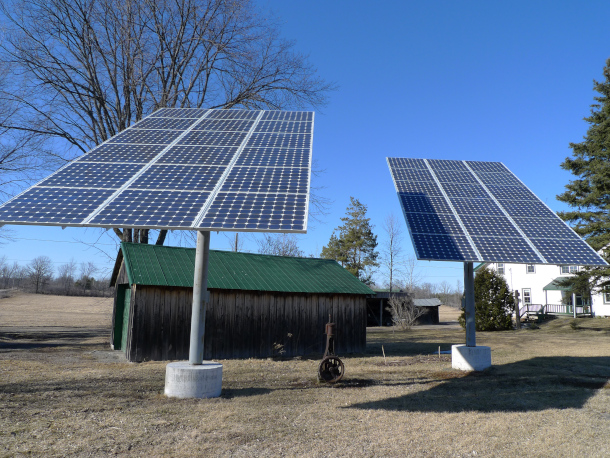 The Biden Administration hopes to use tax credits to incentivize the use of solar power systems and batteries at residential areas and businesses. (Photo: Christine, Flickr, CC BY-SA 2.0)

BASCOMB: Well how can the benefits of solar energy and things like cleaner air and in some cases, lower utility bills, how can that be distributed equitably across the country and for that matter maybe the jobs that come along with ramping up solar?

JONES-ALBERTUS: So glad you brought up equity because it's something we're really thinking hard about and working toward is an equitable transition to a decarbonized economy and energy system. It's so critical that as we increase the amount of benefits that can come from solar deployment, that that happens in a way that benefits all Americans. So yes, in particular, as we scale up solar deployment, that comes with job growth. In fact, the Bureau of Labor Statistics cites solar installer as one of the top three fastest growing jobs they expect over the next decade. And they're probably not using even our most aggressive assumptions for how much solar deployment could grow. And so there's opportunities for job growth solar that's deployed on rooftops and commercial buildings can provide opportunities when it's paired with storage to enhance energy resilience, something that can become you know, more and more important, as we're unfortunately, seeing larger numbers of extreme weather events and disasters. You know, we can really build greater community resilience if we're thoughtfully installing solar and energy storage. And we want to do that so that the communities that can be maybe the hardest hit or in the most in need of that resilience are receiving it. And then of course, solar has the potential to create financial savings. And solar on rooftops today can save households in many areas of the country, significant money on their electricity bill, but you have to be able to afford to put solar on your rooftop or you have to you know own a home, you have to have a good credit score to qualify for a loan and that is obviously not available to many, many members of the country. In fact, you know, we estimate about half of all American households won't have access to rooftop solar, either because they rent a home or, or they have shading on the roof or, or financial barriers. And so we're also putting a lot of investment in something called community solar, which is a large solar installation that households can get a share of and that can be treated as though it were on your roof in terms of financial savings. And that can provide an opportunity then for all households to receive some of these financial benefits that can come from rooftop solar. So we have at DOE the National Community Solar Partnership, which is we have over 500 partners that are working together with us to develop really effective models for affordable community solar and to expand that access to all American households.

CURWOOD: That’s Becca Jones- Albertus the Director of the Solar Energy Technologies Office at the US Department of Energy, speaking with Living on Earth’s Bobby Bascomb

The New York Times | “From 4% to 45%: Energy Department Lays Out Ambitious Blueprint for Solar Power”

Learn more about “The Biden Plan to Build a Modern, Sustainable Infrastructure and an Equitable Clean Energy Future”