One Step Further: The Story of Katherine Johnson 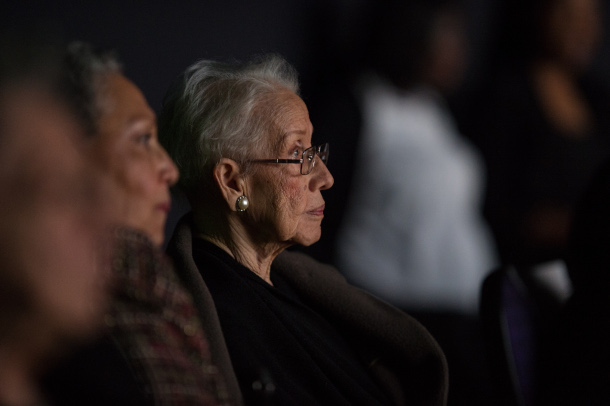 The Living on Earth Book Club recently took a look at the children’s book, One Step Further: My Story of Math, the Moon, and a Lifelong Mission. It tells the story of Katherine Johnson, an African American woman who while living under Jim Crow in the south worked at NASA as a mathematician and helped put a man on the moon. Host Steve Curwood was joined by one of Katherine’s three daughters, Katherine Moore, who co-authored One Step Further to help share her mother's story.

CURWOOD: The compelling story of a mathematics genius who grew up as an African American girl during the era of Jim Crow shows the sky isn’t even the limit, when one considers outer space. The Living on Earth Book Club recently looked at a graphic book for children called One Step Further: My Story of Math, the Moon, and a Lifelong Mission that tells the story of Katherine Johnson. You may know that name as she was the NASA employee who did the hand calculations for many of America’s earliest manned space voyages and her story was featured in movie Hidden Figures. One scene shows her as a child prodigy amazing a teacher:

YOUNG KATHERINE: If the product of two terms is zero, then common sense says at least one of the two terms has to be zero to start with. So, if you move all the terms over to one side, you can put the quadratics into a form that can be factored, allowing that side of the equation to equal zero. Once you’ve done that, it’s pretty straightforward from there.

TEACHER: In all my years of teaching, I’ve never seen a mind like the one your daughter has.

CURWOOD: Hidden Figures tells the story of three Black female mathematicians – Katherine Johnson and her colleagues Dorothy Vaughn and Mary Jackson, and their lives as they worked as human computers at NASA during the Space Race. The film earned three Academy Award nominations and several dozen awards after its release in 2016, and Katherine started to write her own autobiography and memoir. Katherine Johnson passed away in February 2020, at the age of 101, leaving behind her pioneering legacy in astrophysics and three daughters. For our live book club event we were joined by one of those daughters, Katherine Moore, named after her mother, who is also a coauthor of this picture book for children. Katherine Moore told us her mother showed signs of being a math genius even before she had begun school – around the time when a young child might be picking up this very picture book and reading about Katherine’s Johnson’s life. The story goes that her family was told by a neighbor that

MOORE: At four years old, she was walking up the street and said, well, where are you going, little girl. She said my brother is having trouble with math in school, and I'm going to help him. She was the youngest. My grandfather did not stop her or make her go home at four that the friend of the grandmother said, I think I need to start a kindergarten class, she needs to be in school. And that's how it started.

CURWOOD: And Katherine Johnson passed down her fascination with numbers to her own children:

MOORE: And her love of numbers. She said, I just like numbers. They were fun. I counted the plates and the saucers and the steps to church. She counted everything; she really did. And I can remember as a child, we would ride in the car because that's how you traveled. And she'd say, all right, who can add up the numbers on the license plate the fastest. And we'd all do it. So, we were all good in math, because we had fun from the beginning.

CURWOOD: Katherine Johnson graduated high school at the age of 14, and enrolled at the historically Black university, West Virginia State College where her genius was recognized and nurtured. Later on for graduate school she was hand-picked to be one of three students to de-segregate West Virginia University in 1939. 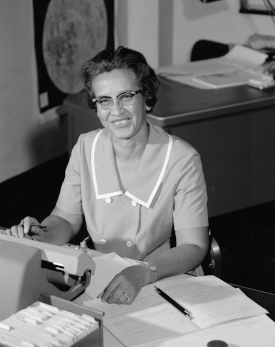 MOORE: She actually had a professor in college, W. W. Schieffelin Claytor was his name. And in those days, if you think about it, a lot of the teachers that were in our HBCUs, back in the 20s and 30s were very frustrated doctors and lawyers and people that could not get jobs, other than teaching other black children. So, he was there. She was so good at math. He said, you'd make a good research mathematician, because that was his passion. But he never got to do what his passion was. And he said, and if that's what your job is going to be, I'm gonna see that you're prepared. So, he wrote a course where she was the only student.

CURWOOD: Of course, Katherine Johnson was a Black woman in the Southern United States during the Jim Crow era. Her daughter recalled that the old adage of Black people having to be “twice as good to get half as much” and says that was certainly true in Katherine’s case. But Katherine Johnson figured out how to finesse the racism that she faced.

MOORE: You don't rock the boat; you just found another way to go around the boat. And I think what she taught us was, you can do what you have to do and stay in your lane. But the minute there's an opportunity, you take it. You don't have to be afraid because her father taught her, Katherine. You're no better than anybody else. But nobody's better than you. And that's how she lived her life.

MOORE: I know what the rules say, I don't have to agree with them. But they don't have to, you know, kill my spirit. I'm not gonna allow that. And they just worked around it. So, the times were hard, you know, there were rough spots. But that was not her way. Her way was just to do her job.

CURWOOD: Before there was NASA there was the, National Advisory Committee for Aeronautics, where Katherine Johnson started working at the age of 35. She started off in the pool of Black women performing mathematical computations for the all-male, all-white flight research teams. In those days the human mathematicians were called computers.

MOORE: She went into the West computers, the group of women. They would come every morning. And say we have some engineers, they're looking forward to mathematicians who can do A, B and C. So this particular day, when they came, Dorothy Vaughn said, Oh, I know just the girl for that job. And that's how she got to the flight mechanics branch, which is where she ended up staying the rest of her 33 years at NASA. It was almost as if her steps were ordered, because she ended up in the right place at the right time for the right job.

CURWOOD: And while Katherine Johnson had to fight at times to be acknowledged for her exceptional mind and math skills, she nevertheless played a critical role in some of the most important moments in the American space race. Her brain had to juggle analytic geometry, celestial mechanics and rocket science to compute trajectories for missions including the first spaceflight of Alan Shepherd, the first American astronaut in space, and the Apollo 11 voyage to the Moon and back. Notably, before John Glenn became the first American to orbit the earth, he personally requested she check the calculations for his flight. 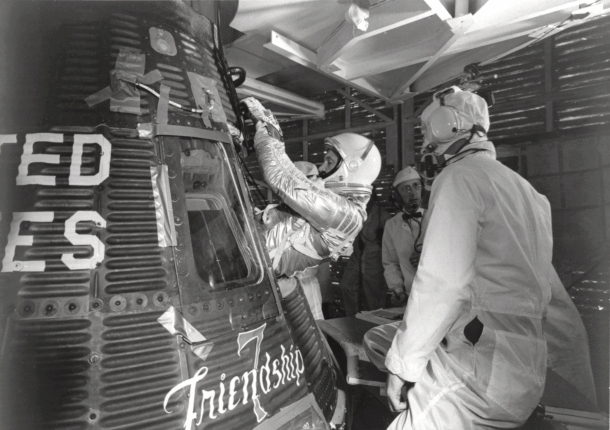 Astronaut John H. Glenn Jr. entering the Mercury capsule “Friendship 7”. Before Glenn became the first American to orbit the Earth, he asked for Katherine Johnson to personally check over the flight calculations to ensure they were correct. (Photo: NASA, Wikimedia Commons, Public Domain)

CURWOOD: Katherine Johnson’s daughter was a college freshman that day.

MOORE: I was here at Bennett at the time. And that's when I really found out what it was she did. Because her picture was on the front page of the newspaper in March of 1962. And I looked down in the library, and I said, that's my mother. And when you read the article, it says the headline said lady mathematician, at NASA gets man to space, something like that. I have the picture framed somewhere. But the point I'm making is the work was secret. She'd come home every day; she didn't bring anything home. But that important work was what she was doing. 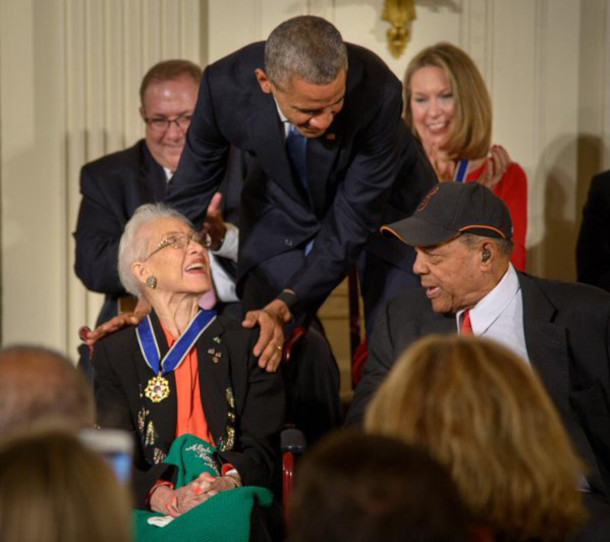 MOORE: I have to say the experiences of hearing what people think of her. It would be very difficult to choose, but I'll tell you how she felt when she got the invitation to go to the White House with President and Mrs. Obama. She said and he kissed me on my cheek because she was able to go, it was just it was a thrill of a lifetime. But she didn't do any of it for awards.

CURWOOD: Katherine Johnson’s story has been told many times over in Hidden Figures, in her own autobiography, and memoir, and now this children’s book. I asked Katherine Moore about the importance of sharing this story with children, especially the parts about her mother’s struggles as a woman working with a white all-male engineering team during Jim Crow, a decision made by the editors at National Geographic

MOORE: I didn't even know about how it was going to turn out because we didn't put it together this way. This is how they summarized her story. And I think it just played more into “in spite of” - you can be successful. You can dream dreams. You can teach people things, no matter what you look like. And I told my sister, I said, I never could have done this on my own, it would have just been, you know, tell her story and all. But they wanted to put it in perspective. And I just think it makes it that much more meaningful. 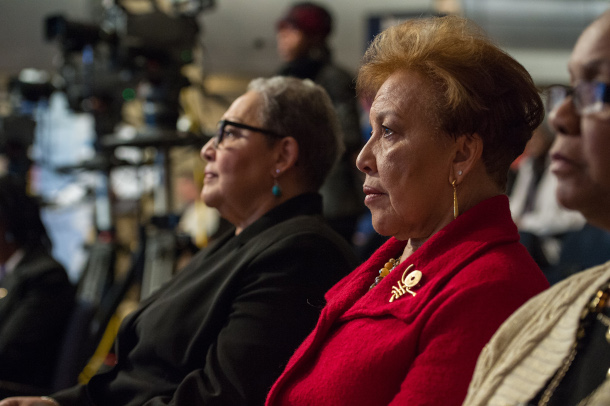 CURWOOD: That’s Katherine Moore, on One Step Further: My Story of Math, the Moon, and a Lifelong Mission, the story of her mother, NASA mathematician Katherine Johnson.