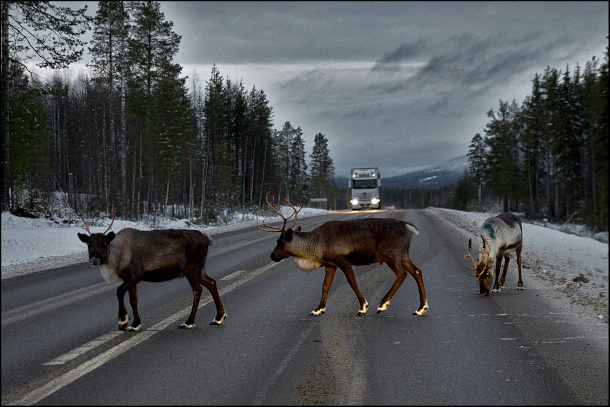 Reindeer crossing a road between Luleå and Malmberget in Sweden. (Photo: Stefan Schmitz, Flickr, CC BY 2.0)

This week, Environmental Health News Editor Peter Dykstra and Living on Earth Host Steve Curwood discuss how wildlife bridges over busy highways are keeping reindeer and other migrating species safe. They then touch on the problem of discarded masks and other PPE plastics polluting the planet during the COVID-19 pandemic. Finally, in the history calendar they reflect back to the 1973 release of the film Soylent Green, which takes place in a dystopian New York City ravaged by pollution, overpopulation and climate change.

BASCOMB: It’s time for a trip Beyond the Headlines now with Peter Dykstra. Peter is an editor with Environmental Health News, that’s EHN dot org and daily climate dot org. He spoke with Living on Earth’s Steve Curwood.

CURWOOD: Hi there, Peter. How you doing today?

DYKSTRA: Hello Steve, I'm doing alright. And Sweden has made a little bit of news in the past week announcing that it's going to build a series of possibly 12 animal bridges over a busy highway. It's the latest effort to help wildlife cross busy highways without getting run over. They're putting in a dozen "renoducts", which if you're not up on your Swedish shorthand, it is shorthand for reindeer bridge. It's going up along a major highway that's crossed twice a year by migrating reindeer herds. The Sami people, the indigenous people of Scandinavia, heard huge numbers of reindeer. This will save the lives not only of reindeer who get hit. If you've ever smacked a reindeer with your car, you are at risk as well.

CURWOOD: It's quite dangerous to run into an animal like that. So where else are these, Peter? I know there's one in Canada. I think in Banff, it's almost as wide as the two lane highway itself for various animals to cross. Where else is this going on?

DYKSTRA: Yeah, the Banff National Park is one of the pioneers of this in Canada. There are wildlife crossings, both bridges and tunnels in places like Southern California for mountain lions. Mexico has been successful in building overpasses and tunnels for jaguars, in the Peruvian Amazon there are passageways for monkeys and porcupines as well. Those wildlife crossings and wildlife corridors, not only save animals and occasionally save human lives, but when an animal gets down to low numbers like the Florida Panther, it helps save the species in another way. Because if there are so few to reproduce, when they are able to reproduce, you want some genetic diversity by having more animals.

CURWOOD: Yeah, the ability for animals to move around safely. Hey, Peter, what else do you have for us today? 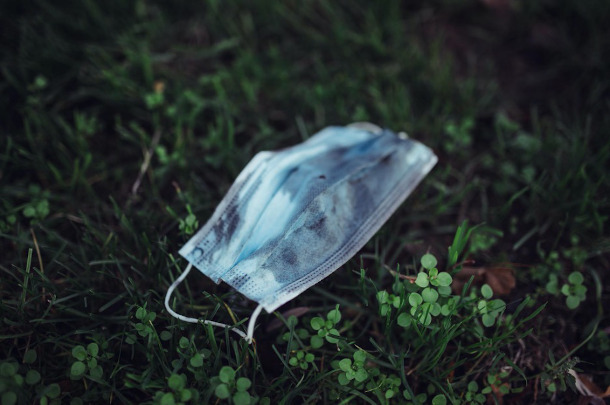 As the use of face masks, gloves and other PPE has exploded during the pandemic, litter is a grave concern for wildlife. (Photo: Ivan Radic, Flickr, CC BY 2.0)

DYKSTRA: Something that we didn't realize was ever going to be a problem, an offshoot of the global pandemic. And that's that face masks are everywhere, including on the ground, in the sewers, in the waters, in the landfills and everywhere else. Those face masks and other personal protective equipment we never gave much thought to, for the most part is made of plastic, mainly polypropylene. It's everywhere on Earth. It's even getting into the oceans.

CURWOOD: You know, when I walk around, it's not unusual to see one of these on the ground.

DYKSTRA: Masks are everywhere. You've also got gloves, sanitary wipes, all sorts of things like that. They're also mistaken by wildlife for other things. There's a bird in Europe called the common Coot. And in the Netherlands, it's been observed picking up face masks in order to build nests.

CURWOOD: Well, that's one way to reuse them anyway, I hope it's safe for the Coots. Hey, Peter, let's take a look back in history now, tell me what you are seeing.

DYKSTRA: May 19th, 1973, a movie called Soylent Green was released. The title refers to what the violent desperate people of New York City are fed. And this all takes place in the far off year of 2022. 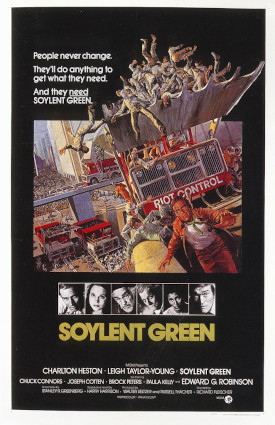 HESTON: You tell everybody... Listen to me, Hatcher. You're gonna tell 'em! Soylent Green is people! We gotta stop 'em, somehow!

CURWOOD: Huh, Soylent Green is people! So why are people eating people in the year 2022 in New York City?

DYKSTRA: There are so many problems that have in this movie cropped up by then, overpopulation is one, pollution is another, and early mentions of climate change in 1973.

CURWOOD: Thanks, Peter. We will talk to you again real soon.

DYKSTRA: Thank you very much, Steve. Talk to you soon.


The Guardian | “How Creating Wildlife Crossings Can Help Reindeer, Bears – And Even Crabs”