Down Yonder in the Pawpaw Patch 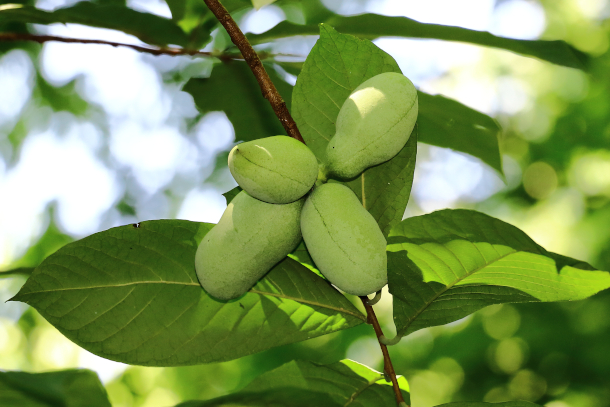 The pawpaw is the largest edible fruit native to the U.S., and it ripens in the late fall, outlasting many of the better-known local fruits like apples. Landscape designer and former host of PBS' The Victory Garden Michael Weishan gives Living on Earth's Bobby Bascomb a taste of the fruit and some pawpaw trees for her to plant at home.

In many parts of North America, it’s well past harvest time, but not for the paw-paw. The paw paw is a native fruit in the Eastern US that ripens in the late fall. Paw paws were a delicious food source for Native Americans, as well for people escaping from slavery on the journey North to freedom. And there are still some paw paw patches feeding folks today, though you can’t find them in grocery stores. Last spring When Living on Earth’s Bobby Bascomb spoke with Michael Weishan, former host of the Victory Garden on PBS, about gardening amid the coronavirus, Michael offered to dig up a few of his paw paws for Bobby to try growing at home. She recently picked up some saplings from Michael and has our story.

WEISHAN: Here are your paw paws, which we'll pull out in just a minute.

BASCOMB: Thank you so much.

WEISHAN: My pleasure. And you can see how the how much smaller the leaves are, compared to what we're going to be looking at. That reduction is typical of plants that don't like to be transplanted. So by next year, they should have leaves of regular size.

WEISHAN: Well, come on down, I'll show you.

WEISHAN: Welcome to my pawpaw grove. So in front of us is the tree, It's probably now about 30 feet tall and 15 feet wide. These are big, long lanceolate leaves, which simply mean shaped like a sword long sword shaped leaves about seven, eight inches long, three inches wide. And then as you go up, you see that they're starting to change color. And that they're a brilliant, brilliant yellow, which is one of the great fall features of this tree. And they're hanging right in front of us are the paw paws. So is that what you expected?

BASCOMB: I've seen pictures. So I wasn't a complete novice. I've never had one. I've never seen one in the flesh, so to speak. But um, no, I thought that they would be maybe bigger or greener or something.

WEISHAN: It looks something like a green potato, wouldn't you say? 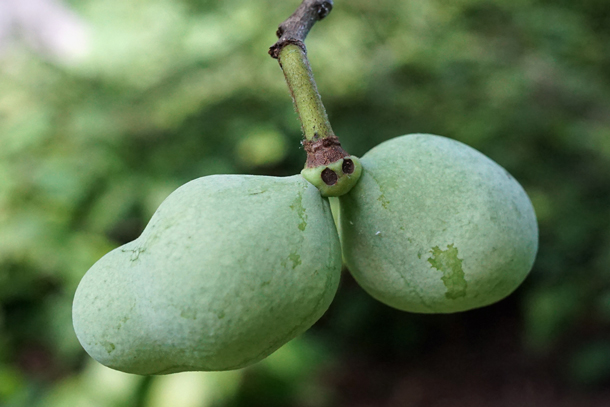 Pawpaw trees provide a rich tropical fruit, whose flavor has been compared to that of mangoes and bananas. (Photo: Plant Image Library, Flickr, CC BY-SA 2.0)

BASCOMB: Yeah, it's a green potato. They're sort of stuck together like a snow man or something .

WEISHAN: Yeah, exactly. They come they come sometimes combined, either they're big, long sort of cylinders, or they're, they're various sort of sets of circles. And sometimes they're just a single set of circle. So the fruit is very variable another reason why they're not in commercial production, because they're very variable. So it would be very hard to ship them. They're also, here you can feel one, they're also quite soft.

WEISHAN: Exactly. That's how you know they're ripe. You take them when they when you push them in, and they dent slightly with your thumb just like an avocado, then they're ready to go. If they fall off the tree, they have a tendency to get bruised. And again, that's why they're not really potentially shippable.

BASCOMB: They're pretty small, too. I mean, this one, I don't know, a quarter of a pound or something.

WEISHAN: Oh yeah, certainly less than a pound about four inches long, three inches long, something like that. See, but what's interesting about this is that these trees are very unusual in they form thickets. And these roots come from underground. So this for instance, this four or five, six foot tree here, right next to it is from an underground growth and they're all tied via underground runners. And so when you try to go dig one up, you sever the runner, which means the plant is really unhappy. So this again, makes for very poor commercial production, which is why you don't see these in local nurseries.

BASCOMB: Now do they only reproduce by sending out runners? Or can you also take a seed and grow it and get a pawpaw? Or is it gonna be more like an apple where you don't know what you're gonna get?

WESIHAN: Oh, you’re going to see the seeds in a minute, you can definitely plant the seeds. And presumably, that's how this was grown. And that would actually be an easier way to propagate than these cuttings because then of course, it would form the roots within the pot. And it would just be integral, you know, as opposed to being split up like this.

The flowers are really interesting too they’re beautiful long purple about inch and a half flowers of a dark sort of vermilion purple color. And, interestingly, they have very little smell or a very unpleasant smell depending on your nose. And they're propagated by flies, and not by bees, they bloom very early before the bees are active. And so there's a whole group of these plants that are propagated by flies and other alternative pollinators. And the paw paw is one of them. 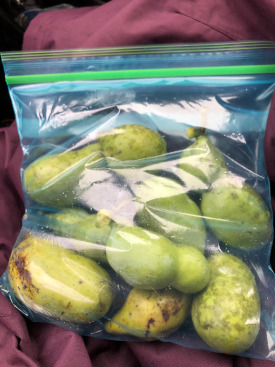 Michael sent Bobby home with quite a few pawpaw fruits, in addition to some trees for her to transplant on her own property. (Photo: Bobby Bascomb)

BASCOMB: Now, my understanding of paw paws I was under under the impression that they grow really well in the south, like the Mid Atlantic region and New England was sort of pushing the envelope for paw paws. But yours looks pretty good here. Are they growing better in this region now? Or is this typically where they you would expect to find them?

WEISHAN: We are at the northern edge of the range. So how much further north they will go? I don't know. You're right. They're very well known down in the middle of Atlantic and southeastern United States. However, with the climate change issue, things are moving north. So they already have predicted that this zone where we are now six B will be closer to 7B within 30 years.

WEISHAN: The nice thing about a paw paw at least these paw paws is that they're free, right? [laughing] So take them home plant it if it dies, try the seeds if it doesn't work, you know you're welcome back here anytime to eat the paw paws

BASCOMB: I'll turn up on your doorstep here I am. [LAUGHING]

BASCOMB: Thank you. Well, can we try them?

WEISHAN: So, here we are outside in the rain, because of our COVID precautions trying paw paws this will be a first.

BASCOMB: Well it's a first for me on every score, I've never had one.

WEISHAN: I'm gonna just gonna cut this open and then split it apart. And it's you can see it's like a banana. So at this point, I'm gonna give you a spoon. And these are the big black seeds. And you just take the seeds out, and then scoop it out like you would custard.

BASCOMB: Hmm! It's so good. Not what I expected. Everybody says banana and mango. And it's got like, the texture of banana maybe, but…

WEISHAN: I think it's more like vanilla custard. Yeah, yeah.

BASCOMB: I gotta try another one. Huh, hmm, my kids are gonna love this.

WEISHAN: It's a delicious eating experience prized by the Native Americans. Of course, this was a principal food source all up and down the East Coast. A beautiful tree, great flower, great fruit, nice habit, and great fall color. So if you can grow one of these in your yard, I highly recommend it. 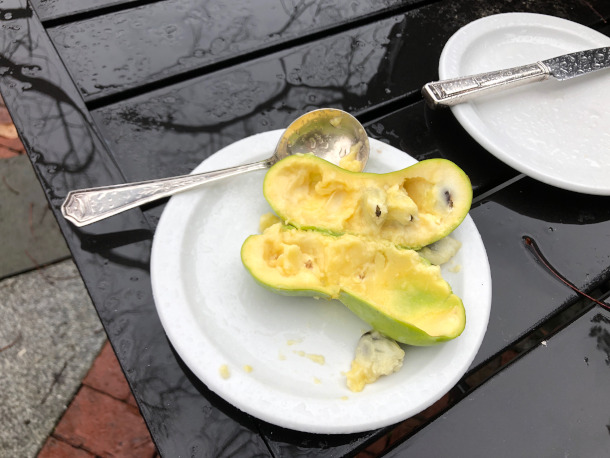 Bobby and Michael sampled one of the pawpaw fruits during their socially distanced walk. (Photo: Bobby Bascomb)

BASCOMB: And the unusual thing too about them. I mean, they taste like a, like a tropical fruit almost here in New England, which is so unusual. But also I mean, we're into November now and you're just now harvesting these. That's pretty unusual. I mean, even apples are sort of on their way out at this point.

WEISHAN: Yeah, my apples are done. I think because they have originated from the South, they are used to a longer growing season. As you can see around as most of the trees have lost their leaves but the Pawpaw is still doing its thing.

BASCOMB: Great. Well, thank you so much. I'm really so grateful for your time and for the pawpaws and I can't wait to try them.

WEISHAN: Well, and I can't wait to have your family try them, you like them already.

BASCOMB: Well, I mean, I can't wait to try to grow them.

BASCOMB: Thank you. This is super fun.