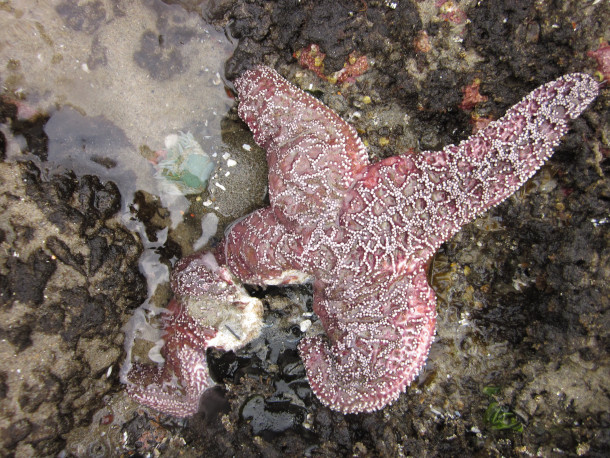 Climate disruption is wreaking havoc on the oceans of the world and the creatures that live there, including sea stars and salmon. Kori Suzuki reports.

CURWOOD: Climate change is wreaking havoc on the oceans of the world and the creatures that live there, including sea stars, which are the victims of a grisly disease known as sea star wasting syndrome. Kori Suzuki has the story.

SUZUKI: In 2013, Drew Harvell was walking down Alki Beach in Seattle.

HARVELL: We found stars that were losing their arms; we found arms that didn't have stars; we found stars where their arms were literally in the process of kind of ripping off and their internal organs spilling out.

SUZUKI: Harvell is a professor of ecology and evolutionary biology at Cornell University.

HARVELL: And this was in the dark by headlamp, so the whole thing was kind of a ghoulish, ghastly scene, really.

SUZUKI: I’m speaking with her at the 2020 American Association for the Advancement of Science Meeting where she’s presenting new research on marine diseases like sea star wasting syndrome—a mysterious, fast-acting disease that causes tissue decay, and can eventually cause infected sea stars to break apart and die.

The sea stars Harvell studies are critical to marine ecosystems. They live in kelp forests, which are home to thousands of fish and other species. Kelp forests are also food for sea urchins. A healthy sea star population feeds on sea urchins, keeping that population in check. But without them, sea urchins can take over.

HARVELL: We're finding huge outbreaks of sea urchins, they create areas that we call urchin barrens that are devoid of kelp.

SUZUKI: The biological cause of sea star wasting syndrome is still unknown. But Harvell’s research has uncovered a major factor driving the disease: climate change. 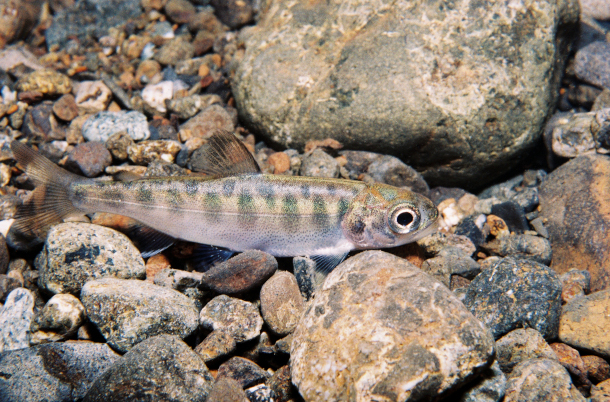 The world where this young salmon will grow up will be far different than that of its parents, and that change will be encoded by the stress response genes in its DNA. (Photo: Flickr, Roger Tabor (USFWS), CC BY-NC 2.0)

As temperatures rise on land, the ocean is also getting warmer. In September, a major United Nations report described underwater heat waves sweeping across the planet. Now, researchers say those heat spikes are fueling disease outbreaks in marine species like sea stars, seagrass and salmon.

MILLER: What we find is that the vast majority of infective agents that infect salmon are positively influenced by temperature.

SUZUKI: That’s Kristi Miller, a professor at Fisheries and Oceans Canada. She says that unusually warm waters cause stress in salmon, making them less prepared to fight off a disease. At the same time, many diseases spread faster at higher temperatures. Miller says these different stressors can work together to fuel the spread of a disease.

MILLER: The presence of two or more stressors can actually create a much stronger effect negative impact on the host or the organism.

SUZUKI: That means disease outbreaks in warming waters can be much worse. In some cases, Miller found that a temperature increase of less than 5 degrees Fahrenheit meant a 60 percent increase in the presence of a pathogen.

But her program has developed a new tool to map these diseases and stressors. It turns out that, when a salmon experiences something like higher-than-normal temperatures, that stress activates a unique genetic response. 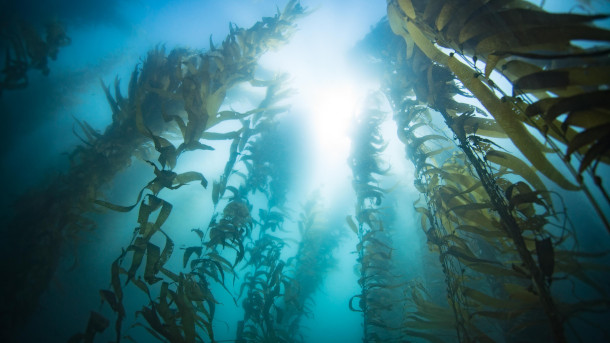 Kelp forests like this one off the coast of La Jolla California are threatened by marine diseases which disrupt the underwater food web. When sea stars die in large numbers, the urchins they usually keep in check can chomp their way through kelp forests. (Photo: Camille Pagniello (California Sea Grant), Flickr, CC BY 2.0)

MILLER: So a thermal stress will cause a general stress response, but it will also cause the activation of a specific series of genes that will be turned on to make proteins to respond to that thermal assault.

SUZUKI: When that same salmon experiences a different stressor like saltier water, that activates a different genetic response. And Miller and her program can read those signs.

SUZUKI: Miller’s program used this technique to look at how disease outbreaks in salmon overlap with other environmental factors—and to show that rising temperatures are fueling those outbreaks. And she says this is a big breakthrough for researchers trying to protect salmon and other keystone species.

MILLER: The reason that that's important is we can't control and mitigate everything. An so if you know what those relationships are and you can say I can't do anything about you know the the prevalence of this infectious agent but I can do something about the level of oxygen in this area or or whatever whatever then you can mitigate that and try to bring down the level of stress and disease.

SUZUKI: For a species like salmon, Miller says mitigating the factors we have control over could make the difference between extinction and a sustainable population.

Read about the Strategic Salmon Health Initiative, a group hoping to use genetic tools to identify stress markers in Salmon