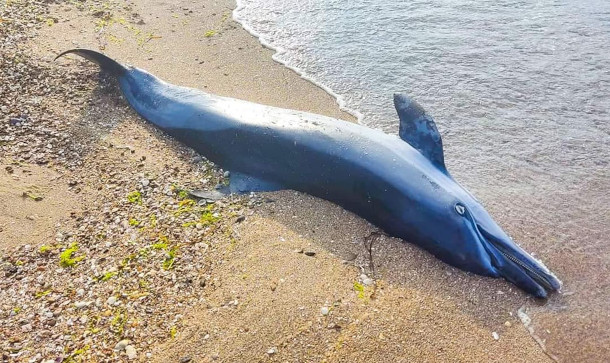 The recent rise in cetacean deaths in the Black Sea is likely due to acoustic trauma from military sonar, scientists say. (Photo: Ivan Rusev)

In addition to the devastating human toll of Russia’s war on Ukraine, marine scientists have documented recent mass strandings of dolphins and porpoises in the Black Sea. A key suspect is military sonar, which can disorient cetaceans that use sound to navigate. Alix Kroeger, a freelance journalist from the UK, spoke with researchers in the region about the impacts of war on marine mammals and joins Host Bobby Bascomb to explain.

BASCOMB: It’s been almost a year since Russia first invaded Ukraine and the Black Sea remains a critical theater of the war. The Crimean Peninsula, annexed from Ukraine in 2014, is home to Russia’s Black Sea fleet, which uses the area as a base from which to launch missiles and send its submarines to patrol the waters. Some say hundreds of thousands of people have died as a result of the war, and marine mammals are another unspoken casualty. Mass stranding’s of cetaceans, or dolphins, whales, and porpoises, are often linked to the use of military sonar, which disorients animals that use sound to navigate. So, many marine scientists working in the Black Sea are looking to sonar as the likely culprit for some 2,000 marine mammals that have washed up dead since the war began. Scientists assume many more died further from the shore and sank undetected, a suspicion they can’t confirm since the Black Sea is an active war zone. Alix Kroeger is a freelance journalist from the UK. She spoke with researchers in the region about the impacts of war on cetaceans. Alix, welcome to Living on Earth!

BASCOMB: So it sounds like the Black Sea has really become a war zone. And many of the cetaceans that live there have become a casualty of that war. Can you tell us about that, please?

KROEGER: That's right. So in the Black Sea, you have very significant populations of cetaceans, and they seem to have been quite badly affected by all this unusual movement in the Black Sea. I spoke to a conservationist from Romania, who said that the number of dead cetaceans washing up on the Romanian portion of the of the coast had nearly doubled between January and May. So in 2021, they had fewer than 100 washing up dead. In 2022, they had 194. What's changed? It's the war in Ukraine. There has been a lot of disturbance. If you think of helicopter noise over the Black Sea, submarines using sonar to get through, all the unusual movement there's been, that has really disturbed some of the marine life. For example, it's driven more porpoises and dolphins towards the Bulgarian portion of the coast because they've just been displaced by all this unusual activity.

BASCOMB: Well, displacement is one thing, washing up dead is another. What is actually causing them to die in this way? 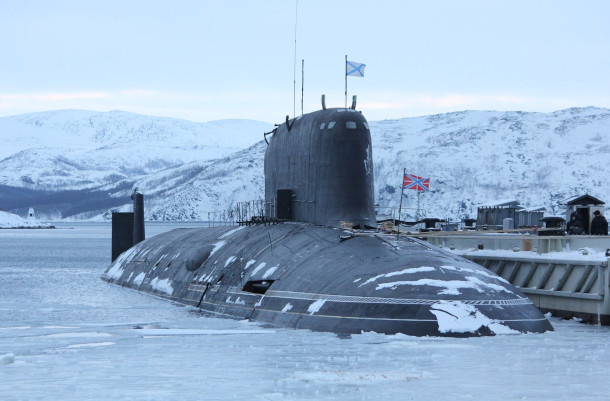 Military sonar from submarines and other vessels can damage cetaceans’ inner ears, interfering with the animals’ ability to navigate. This may make it impossible to find food or avoid shallow waters. (Photo: Ministry of Defense of the Russian Federation, Wikimedia Commons, CC BY 4.0)

KROEGER: Well, the scientists suspect that it is the use of sonar by military submarines. And that disturbs the dolphins and porpoises because that's how they navigate. That's also how they find food. They use their own sonar, these whistles and beeps and clicks to get through the sea. But this very powerful sonar that the submarines are using, it damages the animals’ inner ears. They are thrown off course, they can be washed up on shore, they get into shallower waters, waters that they're not used to, maybe where they can't get as much food as they used to. And they can't get themselves back out again. The problem is because it's military, there's a high degree of secrecy attached. Navies don't particularly want to give all the details of how their sonar operates. Because that could give an advantage to any future opponents. So it's difficult for the scientists to get the exact details on what's going on, and how that affects marine life.

BASCOMB: So it sounds like you know, if you had a hawk, for instance, that was blind and still expecting it to be able to navigate the world and feed itself. It's a similar situation here for cetaceans, with this, you know, damage to their ears. 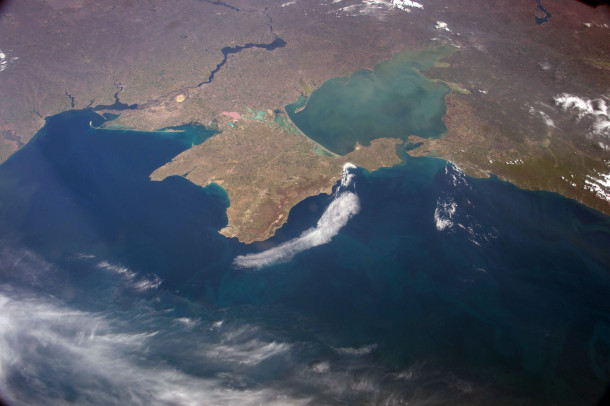 The Crimean Peninsula, annexed from Ukraine in 2014, is now home to the Russian Black Sea fleet, which includes vessels that use powerful sonar. (Photo: Stuart Rankin, Flickr, CC BY-NC 2.0)

KROEGER: I think that's right, yeah, they just can't function in the way that they normally did. And, you know, the Black Sea, if you look at it on a map, it almost looks like an inland lake. So there's relatively little water coming in or out. One of the peculiarities of the Black Sea is that it's actually anoxic. It's dead below I think about 150 meters, so any pollutants can stay for a long time. And if you think of the military activity, sonar may be disturbing dolphins and porpoises in particular, but there's also things like undersea explosions. If submarines are firing missiles, there's pollution. If some of those missiles are shot down, if those then fall into the Black Sea, that causes pollution. And of course, if you think of that massive Russian warship, the Moskva, that was sunk off Snake Island, everything that was in that is now resting on the seabed, and potentially causing damage to the ecosystem.

BASCOMB: So now that we know this is such an issue for cetaceans in the Black Sea, what can be done about it? What are local conservation organizations and governments suggesting here?

KROEGER: Well, the reason I got interested in this story in the first place was reading about a Ukrainian scientist who works in a national park on the Black Sea coast, and he was talking to his colleagues all around the Black Sea, and totting up unusual numbers of dead cetaceans and raising the alarm. He came up with this idea for a protected area, just off the coast. And he's got the Ukrainian Ministry of Environment interested in investigating this, because at the moment, there are very few areas where injured dolphins or porpoises can recover. There are marine protected areas designated under international law around the Black Sea. But the problem is enforcement. There is illegal fishing that goes on. And while there have been efforts to crack down on bycatch, porpoises and dolphins getting caught in fishing gear and dying that way, if the fishing itself is illegal, it's very difficult to control that. What was interesting, I spoke to you know, these conservationists in Turkey, Romania, Bulgaria and Ukraine. They all know each other. They all work together, they go to the same conferences, they share data. So they are working really hard, and they are pooling their resources. The problem is with the war, it's just too difficult to do much research, to get out to sea, you can imagine. And so these datasets that they have spent years building up, they are going to have unavoidable gaps in them. And I think that is really difficult for science. But what is more promising is the way that some conservationists, the Ministry of Environment in Ukraine, they're looking to beyond the war, what happens next? And trying to think of a plan and, okay, how can we do this better in future? So yes, it looks pretty bad at the moment. But they are trying to preserve some optimism at least.

BASCOMB: I mean, we all want to stay optimistic, of course. But in times of war, everything becomes difficult. And you need all of these many countries that you mentioned earlier to coordinate and to work together towards this goal. And, you know, I think it's safe to say that Russia, you know, isn't exactly respecting civilian life in times of war. So what hope is there do you think of them respecting these marine mammals and working towards this goal of conservation? 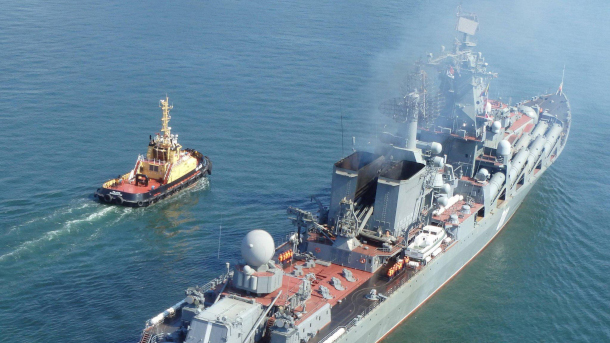 KROEGER: I think that's a very valid question. And the answer is probably not particularly edifying. Certainly, the Russian military has not shown a great respect for the life of its own soldiers. We've heard these accounts of conscripts, newly mobilized soldiers, being thrown into what's described as a meat grinder on the Eastern Front. Russian casualties, human casualties have been very high. Would they respect marine life? I wouldn't want to place a lot of money on it. The scientists may be another matter. And before the war broke out, there was cooperation with scientists from Russia, with their counterparts in other countries. Who knows what it will look like afterwards, but I wouldn't get my hopes up. The priority will probably be on restoring the human population, rebuilding the cities. And after that, there will be more opportunity to look at what remains of the natural world, but that could be quite a long way off.

BASCOMB: Alix Kroeger is a freelance journalist. Alix, thank you so much for your time today.

KROEGER: Thanks very much for talking to me.


BBC Future | “How the War in Ukraine Is Killing Marine Mammals”

About Mare Nostrum (Romania), which has documented a high number of strandings since the war began