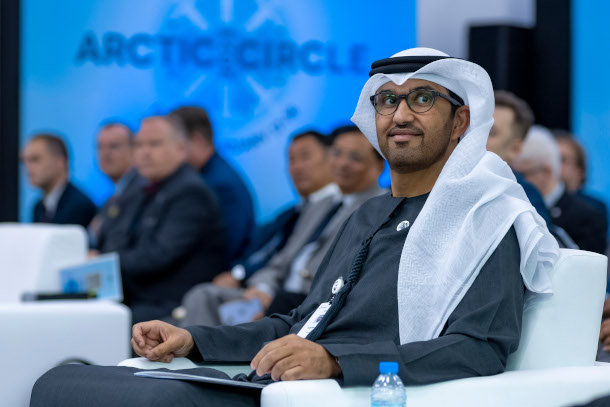 Activists are expressing outrage in the wake of the decision by the United Arab Emirates to appoint oil executive Sultan al-Jaber as President of this year’s UN climate treaty negotiations at COP28 in Dubai. Mithika Mwenda, executive director of the Pan African Climate Justice Alliance and May Boeve, executive director of 350.org, join Host Steve Curwood to explain the concerns and discuss how fossil fuel interests are deflecting progress in the treaty process.

There is outrage over the decision of the United Arab Emirates to have the head of Abu Dhabi National Oil Company preside over the COP28 climate treaty summit this fall in Dubai. Critics say it is a blatant conflict of interest to have oil CEO Sultan al-Jaber lead the UN climate talks which has the mission to transition the world away from the very resource that makes his company wealthy. There have been outcries around the world demanding a replacement. 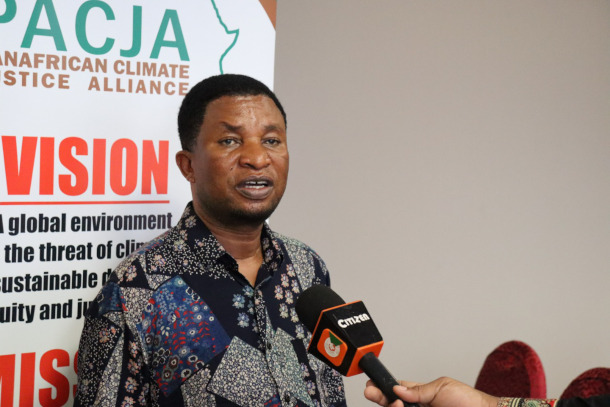 CURWOOD: Yes, I reached Mithika Mwenda, the Executive Director of the Pan African Climate Justice Alliance, based in Nairobi and asked his opinion:

MWENDA: I was really, really shocked.

CURWOOD: To what extent does it feel like, if Sultan Al-Jaber is the President of the COP, that it’s like “the fox guarding the henhouse?”
MWENDA: That is it. It’s, it’s like putting a hyena in the same place with the sheep. We would urge the UAE government to really listen to the cries of the people: women in the Congo forest; Indigenous people in Africa; smallholder farmers whose crops are withered away because there is no rainfall and the thousands of people in the Horn of Africa who are facing starvation as a result of the changing climate. We may not have the power of money, but the power of the people will prevail. The United States is thinking that addressing climate change is like charity to Africa. It is not, because this is not going to be an isolated problem for Africa. It is going to be only that it is coming gradually, and incrementally, because when we are going to sink in this global titanic, all of us are going to perish, though we are going to perish at different times.

CURWOOD: May Boeve the Executive Director of 350.org is on the line now from California, hi there May!

BOEVE: Great to be here, Steve.

CURWOOD: So what was your reaction when you heard that Sultan Al Jaber had been appointed President of COP 28?

BOEVE: I was angry. It's like appointing the head of Smirnoff to an Alcoholics Anonymous meeting. [LAUGHS] Who are we kidding here, you know? This really risks the legitimacy of these meetings in the eyes of the public, because we're on the verge of this massive energy transition around the world. And so to appoint someone who embodies the status quo–what we're trying to move away from–it just doesn't make any sense. 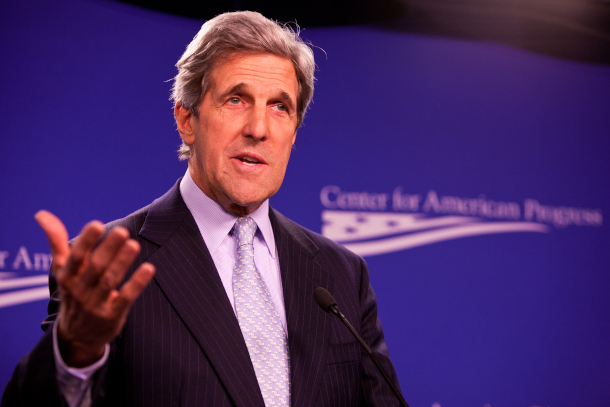 CURWOOD: Now remind us of what the responsibility the President of the COP has during the climate negotiations. What's the role that he or she plays?

BOEVE: So the COP President is the most important governing role at the COP, responsible for setting agendas, and this person also helps set the tone internationally. And that's also really important because the two weeks of the COP are a moment when the global media spotlight is on the topic of climate change. And so our ability as social movements to tell the story of how we are fighting the climate crisis, so much of that happens around the COP. There are often mass marches and protests and actions that really help bring movements together, to remind us everything that we have at stake and the urgency of the fight. And so that tone setting role of the Presidency matters a tremendous amount with so much at stake. And so that's another reason that we're deeply concerned about this appointment.

CURWOOD: Now, of course, the fossil fuel industry has been present at the UN climate treaty meetings before. In fact, at each of the last two COPs more than 500 fossil fuel lobbyists were present. And even going back to Kyoto, Maurice Strong, who chaired kind of the special committee to get things done there -- yes, he was a former undersecretary of the United Nations, but he also was a former oil man from Canada. So, it's not as if the fossil fuel industry has never been involved here. Why is this different? 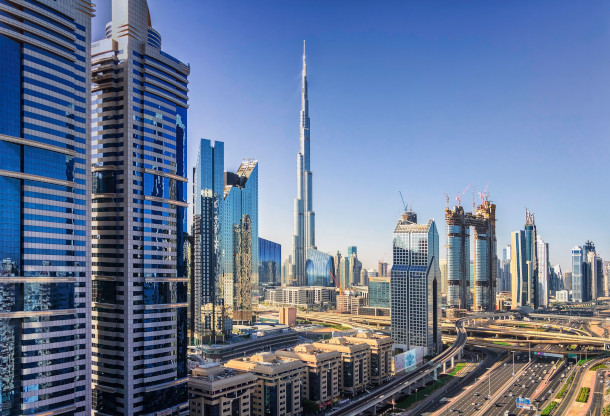 The UAE will host COP 28 in Dubai. (Photo: Kent Tupas on Unsplash)

BOEVE: Well, let's be clear. There are a lot of records that are being broken when it comes to climate change. And we're most familiar with the records around extreme heat and weather disasters. But we're also breaking records for fossil fuel lobbyist influence in this process. So, I was at COP 27 in Egypt; a record breaking amount of lobbyists were present. And you see them everywhere. They're not even hiding. They're, they're in plain sight, making deals. And last year in Egypt, there were some important decisions taken, particularly for the most vulnerable countries in the world. And at this COP, there are some crucial decisions that have to be made to follow up from those decisions last year. And so, if we run the risk of stepping back from where we were, we have a real problem on our hands. And we can't let that happen.

CURWOOD: By the way, there's a fair amount of grumbling from last year's COP that did create this loss and damage fund. But so far there hasn't been a dime put in it.

BOEVE: Exactly. And those are the types of decisions that are taken at subsequent years' COPs. I think that the decision to establish the loss and damage facility, that was a really important thing that happened last year. So, we celebrate this, and we have to keep the momentum going.

CURWOOD: Now, John Kerry, President Biden's international climate envoy, came out in support of Sultan Al Jaber to be president of this COP. What do you make of his support? 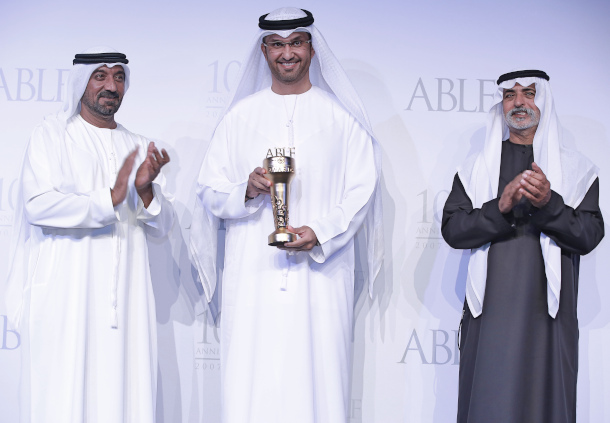 BOEVE: I wonder if it's just a diplomatic gesture, because there's a lot of that at these conferences. There's a lot of countries not wanting to criticize one another. There's a lot of patting each other on the back that happens in these settings. And in this country, where the US finally joined the party and put meaningful national legislation on the table in advance of a COP, we've been waiting decades for this moment, it finally happened. The rest of the world looks at the US like, okay, too little too late people, but we're glad you're here. The US has to take its global role seriously. And so, this welcoming of the appointment is eyebrow raising, to say the least. If this isn't a bridge too far, appointing an oil executive to this post, then what is? And we have to be able to vociferously call out these egregious decisions for the embarrassments that they are. And I think people deserve better than diplomatic niceties at this late stage of the climate crisis.

CURWOOD: Now, what kind of action or reaction to this appointment do you think is likely? I mean, what about boycotts? What about a walkout? Wouldn't be the first time that this would happen. But how could a major walkout impact COP 28?

BOEVE: It would be significant and different. I've been part of previous walkouts of previous COPs that usually happen because something unforgivable has happened in the process. And we all collectively decide to stand with the countries who are saying enough is enough. So there is precedent for this. And there is discussion about whether this decision is an example where we just cannot stand by and let this happen and attend and give it legitimacy with our presence. The thing to keep in mind, which is the other side of that coin, is that this is the one time when every country is present, every country has a voice, small countries, large countries, everybody's there, and for a lot of the activists that we work with, this is a rare chance to be present with delegates from your country who are fighting climate change. And in the US we are so accustomed to often an antagonistic relationship with government and activists over climate. In a lot of parts of the world that's not true. There's actually a lot of collaboration and solidarity between particularly the most impacted countries. And so missing a COP is a really hard decision in those settings. And so much of the climate crisis, as we know, is about equity. It's about who's affected. It's about whose solutions are listened to, it's about who suffers and who doesn't, and to what degree. In a forum like this one with the UN, there is a tremendous amount of space at the table for everyone. And that matters quite a lot. 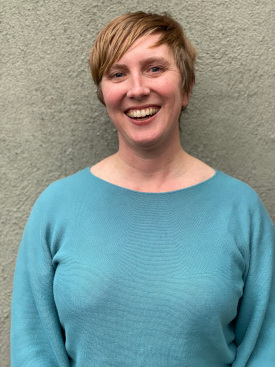 CURWOOD: May, to what extent is this UN process, this Conference of the Parties of the United Nations Framework on Climate Change treaty, to what extent is this even working some 30 years on with the climate emergency advancing so quickly? You're in California, I don't have to tell you about the crazy weather you have there and around the rest of the world.

BOEVE: The way I think about the annual UN climate talks is that for a problem as big as climate change, and as global as climate change, there has to be a way for every country to work together on solutions. There's no way to envision the scale of action we need without a process hosted by the United Nations. And it can't be the only game in town. We need every possible mechanism to address this problem. And that's why I'm so glad that there are multiple venues where people are problem solving about climate change, whether it's forums of mayors that are convened every year by C40, whether it's forums of activists that my colleagues at 350 and many other groups are part of convening, whether it's state officials, and even librarians and athletes now have fora to discuss how to fight climate change. So, we all have to be involved, but there is no substitute for an intergovernmental process at the UN. And for all of its flaws, we have to make it better. And that's why we have to speak up when decisions are taken like this appointment of Al Jaber, we have to raise our voices and say this is not okay because this process means something to us and it means a lot more to people who are the most affected by climate change.

CURWOOD: May Boeve is the executive director of the group 350.org. Thanks so much for taking the time with us today, May.

The Guardian | “Let’s face reality. Fossil fuel interests have destroyed the COPs – we need something new”