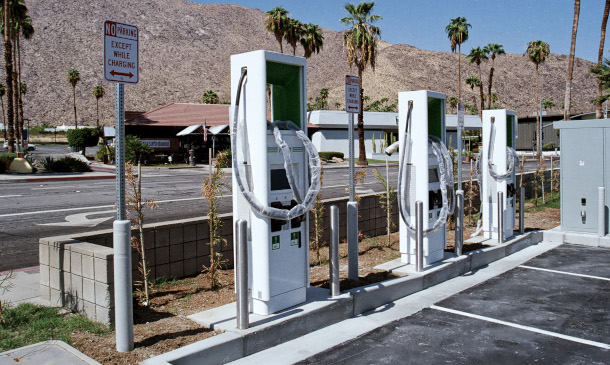 In the wake of climate-fueled fire disasters, California Governor Gavin Newsom recently signed an executive order to ban the sale of new gas-powered vehicles by the year 2035. Living on Earth's Paloma Beltran reports on how switching to electric vehicles helps put the California economy on a path to full decarbonization by 2045.

BASCOMB: With little to no action on climate change the current federal government, states have stepped in to fill the gap and a leader is California. In 1990 the California Air Resources Board (CARB) created the zero emissions vehicle program, aimed at combatting the state’s poor air quality. It required the seven automakers in the US at that time to produce and sell zero emission vehicles or ZEVs. In 1996 General Motors designed an electric vehicle called “impact” or the GM EV-1. It was the first electric vehicle meant for mass production but both the California rule and the small two seater did not last. GM literally crushed every EV-1they made, fearing it would spark a turn away from their money making gasoline cars. Fast track to now and California rules for Zero Emission Vehicles are back. Living on Earth’s Paloma Beltran has this story.

BELTRAN: California has experienced an unprecedented wildfire season this year and climate scientists are telling the state to brace for even more extreme fires in the future.

For California to do it’s part to address climate change and reduce carbon emissions Governor Gavin Newsom recently signed an executive order banning the sale of new combustion powered vehicles by the year 2035.

Governor Gavin Newsom has ordered the phase out of the sale of new gas-powered vehicles by the year 2035 to fight climate change. (Photo: Gage Skidmore, Flickr, CC BY SA 2.0)

Proponents are optimistic that the Electric Vehicle plan will help California meet its climate goals and create an economic boom in the process.

Today electric vehicles tend to be more expensive than gas and diesel. So some Californians worry that this order will make new cars too expensive.

But Jared Blumenfeld California’s Secretary for Environmental Protection says it still makes financial sense to own an electric vehicle.

BLUMENFELD:So on average owning an electric vehicle is lower maintenance, and you don't need any gasoline. So it saves me about four and a half thousand dollars a year than it would a gas powered car. So this is about choice. We want to give people a choice so that you don't have to choose between a dirty vehicle and a clean vehicle because of cost.

BELTRAN: Another advantage is that EV’s are more efficient at converting energy into motion.

And they can be charged at night when base load power might otherwise be wasted.

And there is the possibility that electric vehicles could sometimes serve as assets for the electric grid, with their batteries tapped during periods of peak load demand.

But timing is everything and a major shift to EVs charge up during the day could require an increase in electric power production. 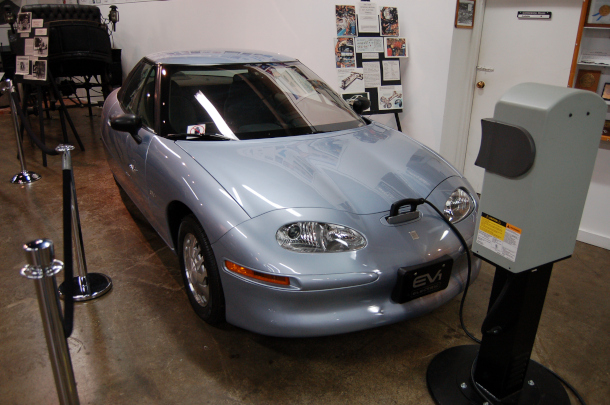 The 1996 General Motors V1 was an electic car available in California for lease. It was expected to be the future of electric vehicles, but General Motors removed the car from the market. (Photo: Joe Ross, Flickr, CC BY SA 2.0)

Transportation accounts for about half of California’s air emissions and the fossil fuel vehicle ban is expected to cut 35% of that, lowering the state’s greenhouse gas emissions and also improving it’s notorious air quality.

About a third of the energy used for the electric grid in California comes from natural gas..

So Food and Water Action Director Alexandra Nagy believes transitioning away from gasoline and diesel powered vehicles is not enough..

NAGY: The vehicles that are still burning electricity at that point, are not guaranteed to be clean, because we still burn a lot of fracked gas here in California to power our lights and our energy infrastructure and cars are no exceptions. So we need to make sure that as we're transitioning to clean technology that it is in fact being powered by clean energy.

BELTRAN: Currently about a third of California’s electricity comes from renewable energy sources such as solar wind and hydro.

But the Newsom administration is planning to double renewable energy in the years ahead, and put the state on course to fully decarbonize by 2045.

For Living on Earth I am Paloma Beltran